Following on from the previous demo, where there was a mixup in dates between us and the demonstrator, this time around it was like fate itself had intervened: our demonstrator was struck down by illness.

Fortunately for us, this time we had a little advance warning, and our chairman and the event organizer managed to find a replacement, Mark Taylor. A few years ago, Mark hung up his salesman suit, and started working full time on his piece of woodland, and on that evening he came to use with his pole lathe and shave horse, to demonstrate how these are used.

Mark clearly is a very happy man, despite his clear knowledge and acceptance that on his own he would struggle to make a living. As far as he is concerned, though, spending all day every day in the woods more than makes up for all the financial deprivations.

His woodland consists mainly of ashes and rowans, with some other typical local species thrown in as well. He had brought some typical items to the demo, hand carved spoons and bowls, but mostly spindle work. His demonstration was a glimpse into what a typical bodger would have done: set up a camp in the woods, assemble a shave horse and a pole lathe (often only bringing along the metal parts and making the rest up from wood cut on site), and then producing hundreds and hundreds of “bodged” spindles, mostly for chairs and tables and the likes.

He started out with an ash log, about 2 feet long and 5″ diameter, and used a special wedge to split it twice down the middle to get 4 quandrants of roughly equal size. One of these was then held on the shave horse and Mark used a drawknife to quickly rough it into shape. 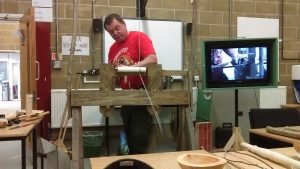 This piece was then mounted between centres on the pole lathe and then turned into a chair spindle with the same tools one would use on a powered lathe: a spindle roughing gouge, spindle gouge and skew chisel.

The main differences are that firstly the bodger has to power his own lathe by constantly pumping a large pedal on the floor, which is connected at the back to a rope. This rope is wound once or twice around the work piece and its other end is attached to a rubber cord mounted between two flexible poles. Between the poles and the rubber, this provides the energy store that pulls the floor pedal back up, thus allowing the turner to initiate the next pump action.

Secondly, actual turning can only happen during the down stroke. In consequence, very good tool control is required to get a decent surface.

Thirdly, the actual turning speed is low compared to motorized lathes, maybe a 200rpm or slightly more. Again, this requires good tool control, and some patience. 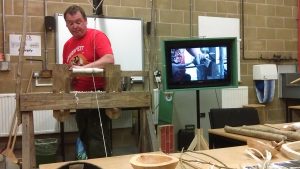 Mark clearly knows what he’s doing, as the finish on his items was nearly flawless. He also demonstrated some bowl turning on the lathe, which is generally done with hook tools and on end grain. This generally involves a cone in the centre to remain in the bowl, so that it can be held on the lathe (there is no such thing as a scroll chuck on a pole lathe), which is then whittled down to a small diameter once the rest of the bowl is finished, and finally removed with a sharp tool when the bowl is taken off the lathe.

All in all, a very entertaining and instructive, some might even say inspirational, demonstration.