The 20th July was a club meeting night. However the evening started badly when we arrived at the Dudley College Mons Hill site. The access road to the college was gated and locked, and club members were refused vehicle access to the building by the contractors. This obviously made things very difficult for some of our more senior members.

The Black Country Woodturners club is very grateful to the landlord of The Caves public house for allowing club members to use the pub car park. Unfortunately, parking at the pub left us with a long walk up through the woods on dirt paths to the college building. As the club meeting was a hands-on evening many members had brought heavy equipment and tools. Sadly for us a large proportion of the equipment was impossible to carry all the way to the college building which meant a somewhat curtailed evening of woodturning, but as usual with our club being a pragmatic bunch of people we made the most of the evening. Thank you to Wolfgang and Ian in particular for just getting stuck in.

The Black Country Woodturners club is very appreciative of the facilities afforded to the club by Dudley College but the club feels let down by not being informed in advance of the access problems. Hopefully the issue will be resolved by our next meeting in September.

As usual for the club, we had a stall at the open day of the Ashwood Nursery just down the road from Wall Heath. This event usually attracts a good crowd, and this year was no exception. There were a few differences to previous years, though: After some initial heavy rain we had a dry day (hooray) and there were no midgets (hooray) and the club had a much bigger stall, consisting of two conjoined tents. 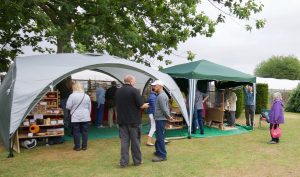 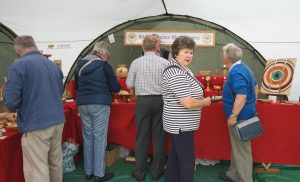 Sometimes there was almost a queue to get to the front! 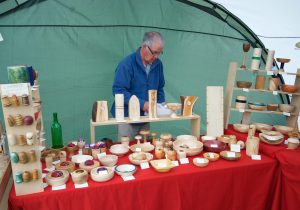 One of our club members with his display.

And this is the display of another club member. 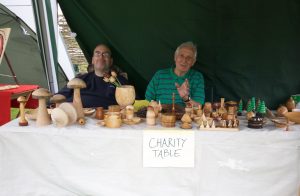 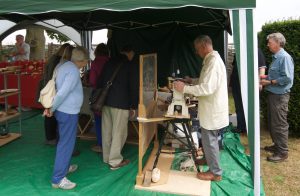 And here the chairman himself demonstrates woodturning.