The club meeting on 18th of January was our first proper demo at the new venue at the Broadway in Dudley. It feature a short turning demonstration by Melvyn Adams, and a much more lengthy demonstration of pyrography by his wife.

In fact, several friends of hers had brought in their pyrography machines, and the whole thing developed almost into a hands-on evening. Advice was freely given and the usage of various different tips, templates, patterns and what not was shown (and tried by club members).

We even had a fan operating to extract any fumes into the outside air. Wouldn’t want to trigger the fire alarm on a club night, would we now?

As you can see from these two pictures, there was strong interest, and several club members made little keyring tabs or similar items.

On the evening we had the highest attendance figure ever for a club meeting, with 36 people being in the room, of which 31 were club members. We signed up a few new members and some others showed interest. 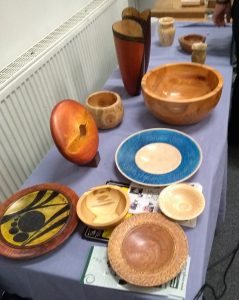 This is an ongoing positive trend: our membership has increased by about 50% over the last 2 years, which makes it easier for the committee (and therefore the entire club) to manage finances, provide new and improved tools and demos. This positive trend was also shown in the number of items on the display table. 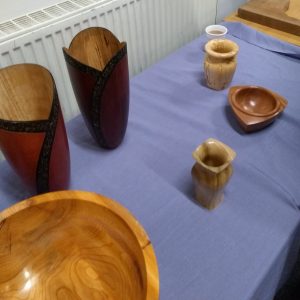