Last Thursday we had Paul Bellamy as a demonstrator. Paul has been in woodworking and turning for a very long time, and brought his own lathe. His subject for the evening was “a bowl from a plank”. This is essentially a method where he cuts rings from a thin blank in such a manner that they can be glued together in reverse, thus forming a conical rough bowl. Once the glue has set, this can then be finish turned. A few minor variations in shape are possible, but obviously the basic shape is predetermined. He pointed out that for people who have access to cutoffs from furniture makers, and didn’t want to spend the time to dry their own wood or the money to pay for bowl blanks, this was a way to get by. 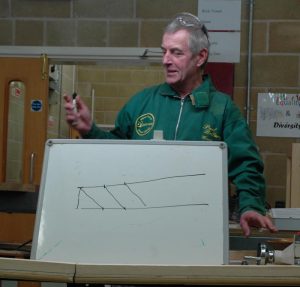 He showed us a few of his bowls, and then proceeded to draw a diagram to explain some of the basics. Essentially in each ring the bottom surface has to match up with the top surface of the ring underneath (see picture). For different thicknesses of planks (and desired height of the bowl) this then determines the cutting angle. He pointed out that despite best efforts one needs to allow for inaccuracies during the cut and also during the gluing stages, and therefore the rings should not be made any thinner than 3/4″.

He then made an actual drawing of the dimensions of the board he was using, which happened to be one inch thick. There is no need to determine the actual angle, all that is needed is to scale up the drawing. He did this on an A5 sheet of paper, simply multiplying both dimensions by a factor of 4, and then drawing a straight line from one corner of the rectangle to the opposite corner (the rectangle being 4″ high and 3″ wide).

He then turned his blank into the round (it was mounted on a screw chuck with the hole not drilled all the way through). The first thing after that was to turn a recess into the board, to create a chucking point for the assembled bowl. This recess was turned, sanded and finished completely.

Next the piece of paper was fixed to the banjo by way of a small magnet, with its long side aligned with the lathe bed. This allowed him to orient his parting tool along the diagonal line, and therefore give the exact angle at which he needed to cut. The first few cuts with a bowl gouge simply removed the waste on the outside, and he then used a 3mm parting tool to cut the rings. He explained that the best tool here is a 3mm tool with a relatively small width, as, especially on the smaller rings) the curvature of the ring does interfere with the blade cutting in, and therefore the cut had to be widened to allow for this. 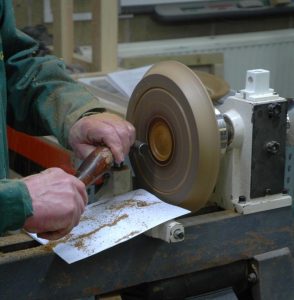 Here you can see him cutting the first ring. This obviously requires a degree of skill, since the tool will ultimately hang over the tool rest by quite some way, and therefore speed should not be too high, to prevent heavy catches. This cut needs to go almost all the way, and one must stop as soon as one can feel the wood giving slightly under the pressure. He used his finger for this, which he claims is the best feeler of all.

He then stopped the lathe and put several pieces of gaffa tape onto the outside of the blank, covering the slot. Due to size restrictions he then took the entire chuck off the lathe so he could move the banjo onto the inside, put the chuck back on, and then very carefully cut with the parting tool the remaining distance from the other side. The tape held the ring safely in place.

He pointed out that once the ring is removed, its edges, and also the edges of the remaining blank, tend to be very sharp and needed to be handled with care, if not trimmed off slightly.

This action goes on until all rings are cut, usually 3 or 4 depending on board thickness and diameter.

Once all rings are cut, they need to be glued together, but in reverse, i.e. stacked on top of each other such that the flat surfaces match up. He uses Titebond Polyurethane glue for this, the reason being that it expands slightly and fills any voids, thereby creating a better bond. He has made himself a little jig for this, consisting of two large square pieces of kitchen counter, with 4 long threaded rods and wing nuts. Glue is applied to each surface, the rings are carefully stacked, using the fingers to ensure they are centered as well as is possible and then the stack is moved gently into the jig. It is important to apply the pressure evenly from all 4 rods, and to check regularly that the rings are not “swimming” away during this process. 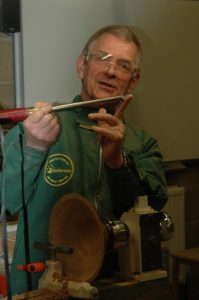 Paul then moved on to a previously glued stack. He used the screw chuck (the hole in the bottom ring is now on the inside of the bowl) to mount the bowl again, and then started to refine the outside shape of the bowl. This requires small cuts, as the screw chuck only has a little hold on the assembly. Once the outside is finish turned, with whatever variations in shape are desired and possible, it is sanded and finished. The assembly is then reversed and now mounted onto the recess, and the bowl is turned on the inside.

Paul prefers bowl gouges with only a short wing, almost a traditional grind, and explained that this is needed to get around the curve at the bottom of the bowl. With a carefully controlled cut no scraping is required.

He also explained his various little tricks, such as always keeping his sandpaper in the right order of grit, thus only allowing the roughest grit to acquire a dusting. He uses lots of little magnets everywhere to make sure his little helpers (such as rulers etc.) are to hand when needed, and not covered with shavings. He never uses large pieces of sandpaper, and recommends moving in a continuous action from one end of the bowl to the other, so as to avoid any burning or heavy sanding marks, pointing out that sand paper should not be used to define the shape of a piece, it should only ever be used to remove tool marks.

He recognises that many finishes are possible for these bowls, but for demonstrations always uses melamine lacquer, simply because it dries very rapidly and provides a very smooth finish with medium shine. This can then be improved on with a stick of carnauba wax, which is simply run across the surface several times, and burnished with a piece of paper.

All in all, a very enjoyable demo, with Paul paying good attention to the needs of safety and always making sure he brought his whole audience along, including any newcomers.