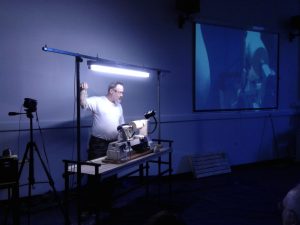 Club member Wolfgang Schulze-Zachau was our demonstrator for the April meeting. His demonstration was based around deep hollow forms. Wolfgang started the evening talking about the pros and cons of working with dry or green wood. He had brought a number of blanks with him and asked his audience which blank he should use for his demonstration.

He gave incisive and thoughtful advise on how to deal with green wood turning, which he said was his preferred type of wood to work with. He answered several questions from club members relating to green wood turning. Wolfgang passed around a number of his very large deep hollowing tools and answered questions on how and when to use the different tools. He said that during his demonstration the method he would be showing us was the way he did things, and not specifically the way someone else might approach the same task.

Wolfgang chucked up the blank and set about shaping the outside of the form. He kept up a continuous commentary of everything he was doing, from the height of the tool rest to the different types of cuts he was using and which part of the tool he was using as well as the best angle of approach. This was ideal for some of the novice members in the audience but it was also helpful and thought provoking for the more experienced turners as well.                                      Wolfgang then discussed the merits of different drill bits to make a start with hollowing. As it turned out he decided to start with a spindle gouge. He had a couple of issues with the club lathe and chuck both of which needed additional tightening up. But then he very quickly got on with the main event of hollowing out the form. This was when the necessity for the extra long handle became apparent. With the handle tucked under his arm Wolfgang showed club members the safe way to approach the opening and how to hollow out the bowl, slow and steady. He said you needed to develop a feel for the tool as it cut inside the form and the only way to do that was lots and lots of practice. He said that having a good light source was also essential to enable you to see inside the hole you were hollowing and recommended using a headset incorporating magnification and a light source.

Club members brought in some fine pieces for the display table. (sorry about poor quality photos) 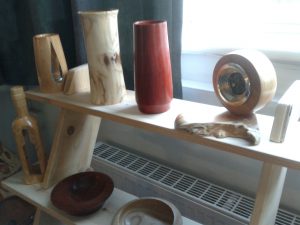 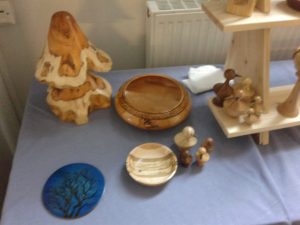